Quick Pops
Top 10 Countries With The Most Freelancers 2023
Top 10 YouTube Competitors and Alternatives 2023 (Updated)
FCFS Scheduling Algorithm (Preemptive) in OS With C++,...
Z Library: The World’s Largest eBook Library Is...
A STEP-BY-STEP Tutorial on How To Apply For...
Top 10 Largest Smartphone Manufacturing Companies 2023 (Updated)
Functions in C++ (With Examples)
The US Authorities Have Banned Z Library, But...
Crypto Mining Proposed as Negative Industry in China...
13 Best Z Library Alternatives in 2023
Home » What is an Operating System (OS)?
ICT

What is an Operating System (OS)?10 min read 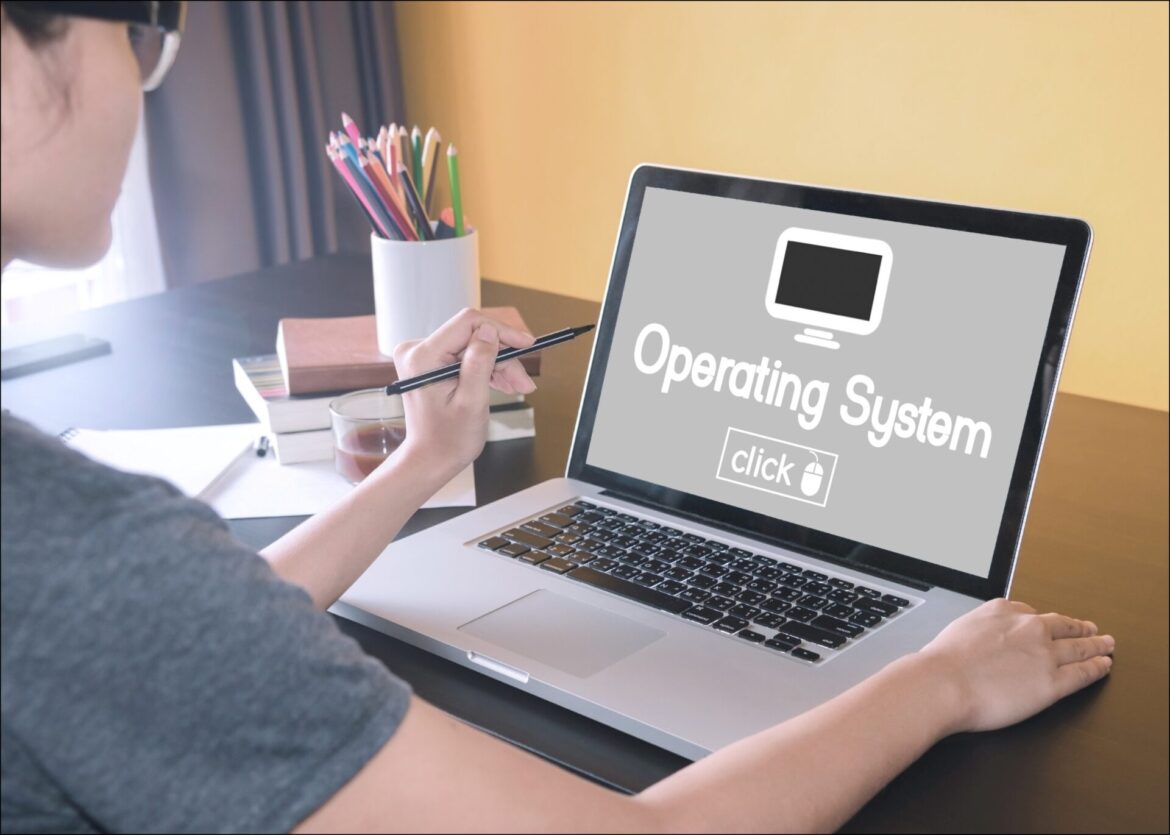 The operating system is the backbone of any computer system, providing a platform for applications and services. It is responsible for managing the system’s resources, controlling user access, and ensuring the system’s security. Operating systems are essential for enabling computers to run efficiently and securely and providing users with a platform to develop and use applications.

What is an OS (Operating System)?

An example of an operating system is Microsoft Windows. This system provides a graphical user interface (GUI) that allows users to interact with the system using a mouse and keyboard. Additionally, Windows provides various services such as file management, memory management, device drivers, network connections, and system security.

Without an operating system, a computer is nothing more than an empty dump of metal. To run application programs on a computer, an operating system must be installed.  Operating systems carry out fundamental tasks, including accepting input from input devices, sending data from main memory to the CPU for processing, and sending output to output devices. In addition, it manages peripheral devices and maintains track of files and folders on the hard disk drive.

Why Use an Operating System?

Using an operating system is essential for any computer because it makes it easier to interact with the hardware. For example, an OS can manage a computer’s memory and hard drive, allowing the user to store and access data. It also provides the user with a graphical user interface (GUI), which simplifies the process of interacting with the computer. Additionally, an OS enables multiple users to share the same computer and provides security measures to protect the data stored on the computer.

An operating system is responsible for managing different resources on a computer. For example, it determines how memory is allocated, tasks are scheduled, and data is stored. It also provides a platform for applications to run on. Without an OS, applications would not be able to access the computer’s resources or communicate with each other.

Without an operating system, users would have to control manually every aspect of their computers, such as manually allocating memory and scheduling tasks. This would be extremely tedious and time-consuming. Furthermore, users would be unable to easily install or uninstall applications, as there would be no platform to run on.

Functions of an Operating System

Below are the common functions of an Operating System:

Memory Management is a process of controlling and coordinating the computer’s memory and its use. It is responsible for allocating system resources, such as memory and disk space, to processes and programs to ensure the efficient and effective operation of the system. Memory Management is an important part of the Operating System, as it ensures that the system resources are used efficiently and effectively. It also helps to prevent the system from running out of memory, which can cause an application or program to crash. Memory Management is typically handled by the system’s virtual memory manager, which is responsible for allocating memory to processes and programs based on their current and future needs.

Device Management is an Operating System function responsible for managing hardware devices connected to a computer, such as printers, scanners, and other peripherals. Device Management provides the means for a user to monitor and control the status of connected devices. It also allows the user to configure the device’s settings, such as the printer, to suit their needs. Device Management also allows troubleshooting any issues that may arise with the connected devices. Furthermore, it can provide the means to install and uninstall drivers and software that may be required for the proper functioning of the hardware devices.

File Management is one of the core functions of an Operating System. It allows the OS to store, organize, and manage all the files and data stored on the computer. File Management includes creating, opening, editing, deleting, and moving files and folders and organizing them into a logical structure. This includes storing data in different formats, such as text, images, and videos. The OS also includes tools to search and find files and allows users to set permissions on files and folders to control who can access them. Additionally, it includes the ability to compress and encrypt files for security.

Input/Output (I/O) management is a critical component of an operating system. It manages data flow between the computer and its peripherals, such as keyboards, disks, printers, and other devices. It is responsible for receiving data from the user, sending it to the device, and processing it in the system. It also handles the control signals, such as interrupts and status signals, that allow the system to communicate with its peripherals. The operating system must be able to control the timing of these signals to ensure that the data is sent and received correctly. It must also be able to handle errors that may occur during I/O operations.

Secondary storage management is the process of managing and organizing data stored on secondary storage devices, such as hard disks and USB flash drives. The purpose of this process is to ensure that data is organized and stored efficiently. This is done by creating partitions, allocating space for each file, and organizing data into folders. Secondary storage management also involves managing the input and output of data from the secondary storage device, such as reading and writing data from and to the device. Additionally, it may involve compressing and encrypting data for improved security. It is important to ensure that data is organized and stored correctly to maximize the device’s efficiency and performance.

A protection system is a set of rules and mechanisms that are put into place to protect resources from unauthorized access. The most common form of protection system is the access control list (ACL), which is a list of users, groups, or other entities that are granted access to specific resources. The protection system defines the type of access each user or group has to a particular resource, allowing the system administrator to control who can view, modify, or delete the resource. The access control list also helps to prevent malicious users from accessing resources they are not authorized to access. Additionally, a protection system can include authentication, encryption, and other security measures to ensure the system’s integrity.

Components of an Operating System

The operating system is composed of two components that enable it to carry out the aforementioned functions: one part to manage the data and instructions and a second to manage the hardware.

It is the outermost part of the OS. Shell is the user interface of an operating system. It is responsible for taking user commands, interpreting them, and then executing the appropriate instructions. The shell is the main way a user interacts with the operating system. It can launch applications, navigate the file system, and perform system-level tasks such as creating users and running system diagnostics. Additionally, the shell can be used to customize the operating system, such as setting environment variables, creating aliases, and editing configuration files.

Operating systems are the backbone of a computer system and come in various types.

In this section, we will provide an overview of the types of OS we will discuss each in detail in our upcoming guides.

Batch Processing Operating Systems allow users to queue up jobs for execution at a later time. These jobs are then executed in batches, and the system is responsible for scheduling and allocating resources.

Multiprogramming Operating Systems are the type of OS that support multiple programs simultaneously. They allow multiple programs to be executed concurrently and effectively allocate resources to each program.

Multitasking Operating Systems are responsible for allowing multiple tasks to be executed simultaneously. These tasks are usually related to the same program or application, and the operating system manages the resources required for each task.

Real-Time Operating Systems are designed to respond to events in real-time. These operating systems are used for applications requiring quick response times, such as industrial automation, robotics, and aircraft control systems.

Multiprocessor Operating Systems are used to leverage the power of multiple processors. These operating systems can divide tasks across multiple processors, allowing them to be executed in parallel and thus improve the overall system performance.

Parallel Processing Operating Systems execute multiple tasks concurrently by dividing each task into smaller subtasks and executing them simultaneously across multiple processors. This allows the operating system to utilize the power of multiple processors and improve the overall system performance.

Embedded Operating Systems are the OS types that run on embedded devices, such as smartphones and tablets. These operating systems are typically designed for specific tasks and are optimized for power and space efficiency.

In the 1980s, Microsoft released the MS-DOS operating system. It was designed to run on IBM’s personal computers, and was the first operating system to gain widespread adoption.

On August 24, 1995, Microsoft released Windows 95, which was the first operating system to feature a fully-functional graphical user interface (GUI). It was designed to run on IBM-compatible computers, and was the first version of Windows to gain widespread adoption.

On March 24, 2001, Apple released Mac OS X, which was designed to run on their Macintosh computers. It was the first operating system to feature an Aqua-style graphical user interface (GUI).

Finally, on September 23, 2008, Google released the Android operating system. It was designed to run on smartphones and tablets and was the first mobile operating system to gain widespread adoption.

These are the most popular operating systems of all time:

2. Increased user accessibility: Operating systems provide an easy-to-use graphical user interface (GUI) that makes it easier for users to interact with their computers.

3. Improved device support: Operating systems provide drivers and other software programs that allow users to use peripheral devices such as printers, scanners, and digital cameras.

7. Increased software compatibility: Operating systems provide a platform for applications to run, allowing users to install and use programs from different vendors.

2. High cost of upgrades: Upgrading the operating system can be expensive, especially when additional features are needed.

6. Complexity: Operating systems can be difficult to understand and use, especially for new users.

7. Compatibility problems: Operating systems are not always compatible with different types of software and hardware.

Entrepreneur: Types, Characteristics, and How To Become an Entrepreneur