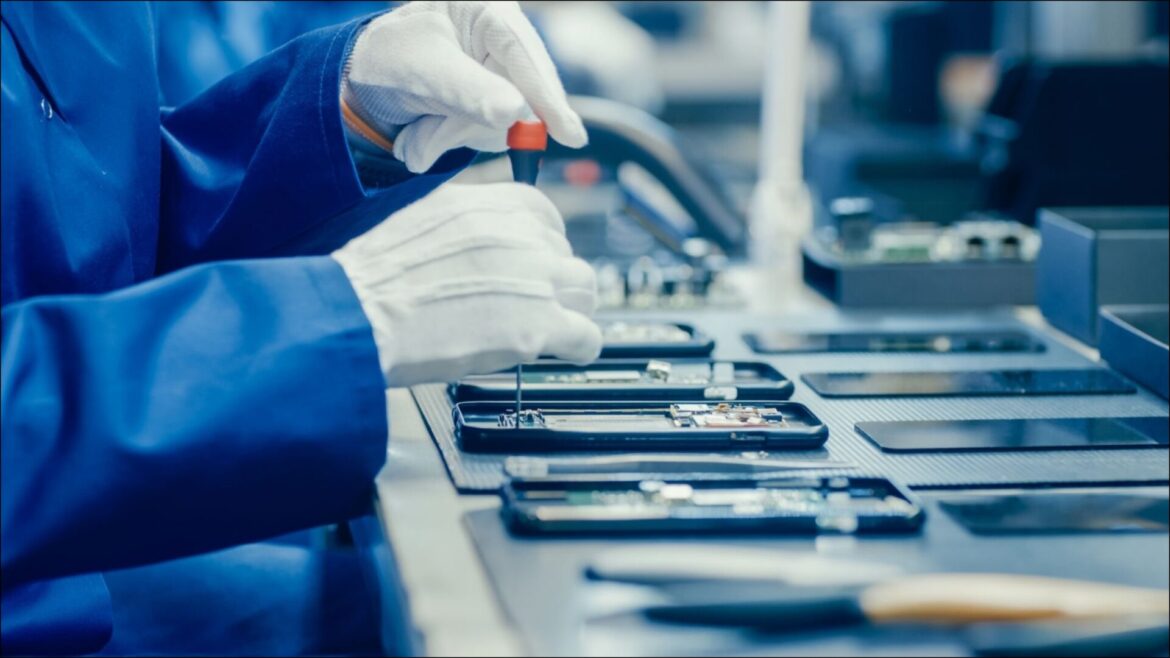 Smartphones have transformed our daily lives. Consumer preferences constantly change as new technologies emerge daily, bringing the most up-to-date designs, innovations, and functionalities to the market. Top mobile manufacturers are investing heavily in high-resolution cameras, composition, CPUs, a modern appearance, and accessories, all while paying close attention to the demands of their customers.

Smartphones have grown in popularity over the last few decades. The global smartphone market is genuinely massive, with an estimated 6.4 billion people using them (about 83% of the world’s population).

As a result, we’ve compiled a list of the top 10 largest smartphone manufacturing companies in 2023.

Samsung is a global leader in the smartphone market, with substantial R&D continually striving to improve product capabilities. Samsung has broadened its product range from low-cost smartphones to high-end smartphones to meet all customers’ demands. Samsung is recognized for its Galaxy smartphone line, and the Samsung Galaxy S7 edge+ and Galaxy Note 7 are the company’s flagship devices.

While the Galaxy S21 may cost up to £1,300, other handsets can be purchased for as little as £150. The Galaxy was the first phone to use Google’s Android operating system, introduced in 2009 (21 years after Samsung’s first phone).

Apple has an extensive client base because it provides products with outstanding design and functionality, making it a more aspirational brand for individuals worldwide. As of December 2017, Apple has a global footprint of roughly 22 countries and 499 retail locations. Apple’s flagship product, the iPhone, is recognized for its high specs and attractive, simple design.

Apple’s first iPhone was introduced in 2007, while the iPhone 11, 11 Pro, 12 pro max, and later iPhone 13 Pro Max are the most current iPhone models. The new iPhone has sophisticated three-lens cameras and the most potent and intelligent processor ever seen in a smartphone.

Huawei is considered one of the most critical innovation centers globally, and the company spent 14% of its sales on research and development in 2016. Huawei has a presence in more than 170 countries and plans to build its own operating system, demonstrating its significant mobile market potential.

Huawei announced the HUAWEI P20 and HUAWEI P20 Pro smartphones in March 2018, including the world’s first Leica triple camera. Huawei has established itself as a leading worldwide smartphone brand due to these advancements, which have raised the bar for smartphones.

Oppo has launched a broad range of smartphones, ranging from low-cost models to high-end models aimed at affluent customers. Despite being a latecomer to the smartphone industry, Oppo has established a strong brand. On the other hand, Oppo has become one of the top mobile phone companies in 2021 because of its creative marketing campaigns and branding, as well as outstanding product quality.

Oppo became the official sponsor of the Indian Cricket Team in 2017, boosting the brand’s reputation and exposure. In India, the company partnered with Bollywood actors who became the brand’s face. Apart from that, Oppo has a dependable distribution network that includes over 200,000 retailers in India alone and others across the world.

Vivo is a newcomer to the mobile phone industry, having been established only 12 years ago. Last year, they sold 95 million units, the great majority of which were in Asia. In China, where the business is located, it was the most prominent phone manufacturer in sales at the beginning of 2021, with slightly under a quarter of the market.

With a market share of about 16% in India, Vivo is the third-largest phone manufacturer after Xiaomi and Samsung.

Xiaomi is the world’s largest smartphone company. The Redmi and Mi series is Xiaomi’s leading brands, and they have won millions of customers’ confidence. Xiaomi’s brand value has been developed by emphasizing innovation and cutting-edge technology.

With its unique Mi and Redmi Series smartphones, the manufacturer has a foothold in India, China, Brazil, Singapore, Turkey, and other Asian countries. Xiaomi shipped roughly 90 million handsets in 2017, putting the company among the top 10 smartphone manufacturers globally.

Over the years, Lenovo has grown to become one of the top global mobile manufacturers, with a worldwide influence in 160 countries. Smartphones from Lenovo’s P, K, and A-series, as well as the Zuk Series and VIBE, are all highly-liked. Lenovo also debuted the Moto Z models, which live true to the company’s motto of “Different is Better.”

Tango smartphones from Lenovo include unique sensors that can detect motion and estimate the contours of space; it can also use augmented reality to measure the interiors of residences and buildings.

LG is a well-known refrigerator and air-conditioning brand. Customers have been delighted by LG’s smartphone range, which has outstanding Android features. The K-series, G-series, LG Tribute, Flex, and Nexus are LG’s premium smartphone models.

These smartphones include advanced camera functions such as high-speed focusing and noise reduction for improved calling and shooting.

ZTE is well-known for manufacturing smartphones, low-cost phones, tablets, and other network and telecommunications equipment. ZTE smartphones are also offered under the “OEM” brand name in several countries across the world.

ZTE has a presence in over 140 countries because of intelligent marketing, an extensive distribution network, and effective advertising.

Nokia bought Alcatel-Lucent in 2016. However, the company continues to operate under Alcatel-Lucent, with the OneTouch series being its most famous smartphone line. The excellent quality and standards have attracted a large number of clients, and the company also offers customization and specialization in technology to meet the customers’ demands.

Pixi, Idol, and Pop are among Alcatel Lucent’s premium smartphone models. The company recently introduced the A50, A30 Plus, Idol 5S, and Pop 4 Plus smartphone models and the Idol 4 and Idol 4s series, which include virtual reality.

The Role of Social Media in Education

It’s an amazing article in favor of all the
web visitors; they will take advantage from it I am sure.

It’s a shame you don’t have a donate button! I’d most certainly donate to this fantastic blog!
I suppose for now i’ll settle for bookmarking and adding your RSS
feed to my Google account. I look forward to brand new updates and will share this site with my Facebook group.

This is a very informative blog for Xiaomi Smartphones. I don’t even know about those facts, thank you for this informative knowledge. Keep posting this type of blog.