Recent Updates
What is Cryptocurrency, and How Does It Work?
5 Best SEO Plugins For WordPress 2022
What is Encryption, and How Does It Work?
Telegram Premium Subscription is Now Available, With Added...
What is CGI?
What are WordPress Tags?
What is Ransomware?
7 Best VPN For PC Free (2022)
Top 10 Countries With The Most Freelancers 2022
Telegram is Said To Be Launching a Premium...
Home » Constants & Variables In C++
C++

Constant & Variable In C Plus Plus 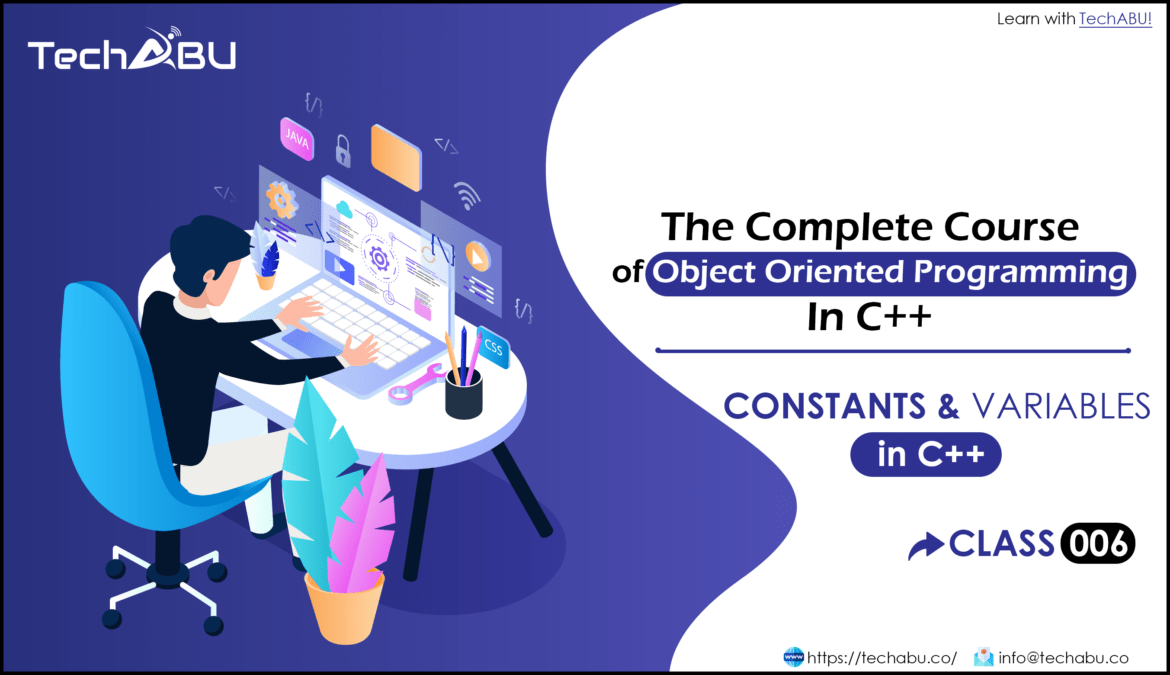 Variables and constants are the essential components of every programming language.

A constant is a memory location where a value can be stored, similar to a variable. Constants, unlike variables, do not change in value. When a constant is created, it must be initialized. In simple words, a Constant is a quantity that cannot be changed during the program execution. Constants in C++ are divided into two categories:

The most apparent type of constant is literal. They are used to represent specific values in a program’s source code. We’ve previously used some in our previous tutorials to assign variables specific values or to express messages we wanted our programs to print, such as when we wrote:

The number 20 in the above code was a literal constant.

A string constant is a collection of alphabetic characters, digits, and special symbols enclosed in double quotation marks (“”). It can be up to 256 characters long. Some examples of valid string constants are shown below.

Integer Constant consists of positive and negative signed numbers without the fraction or decimal point. For example: 786, -670, 40, etc.

The numeric constants having a decimal point are called floating-point constants.

The constants represented in the octal number system are called octal constants. Octal constants start with 0, followed by a sequence of digits in the range 0 to 7. Octal numbers are integer numbers of base 8, and their digits are 0 to 7.

A symbolic constant PI, for example, can be used to represent the value of PI, which is 3.141593. Wherever its value is required, PI can be written in a program.

In C++, a variable is a name for a piece of memory that can hold data. A variable can be considered to be a mailbox where data can be stored and retrieved. Random Access Memory (RAM) is a type of memory available in all computers that programs can use. When a variable is declared, a portion of the memory is reserved for it.

Variable declaration is the process of defining a variable’s name and type. Before they can be used in the program, all variables must be defined.

Different data types need specific amounts of memory. When a variable is declared, the required number of bytes is allocated.

The General Syntax of declaring a variable in C++;

Consider the following line of code;

Salary is an int data type variable that has been given the value 14 as an integer.

The variable’s int data type implies that it can only contain integers. We can use the character, floating, or double data type if we need to store decimals, characters, and exponentials.

In the following tutorial, we’ll go through all of the data types in depth. The variables are created in RAM, which is temporary memory. That’s why the data stored in variables is also temporary.

It is important to note that more than one variable of the same type can be declared in a single statement by separating them with commas.

The process of assigning a value to a variable at the time of declaration is called variable initialization. The equal sign = is used to initialize a variable.

Rules For Naming Variables In C++

An identifier or variable name is the symbol used to represent a variable. Variables are named according to a set of rules. Below listed are the rules for naming variables: