Input & Output Functions In C Plus Plus 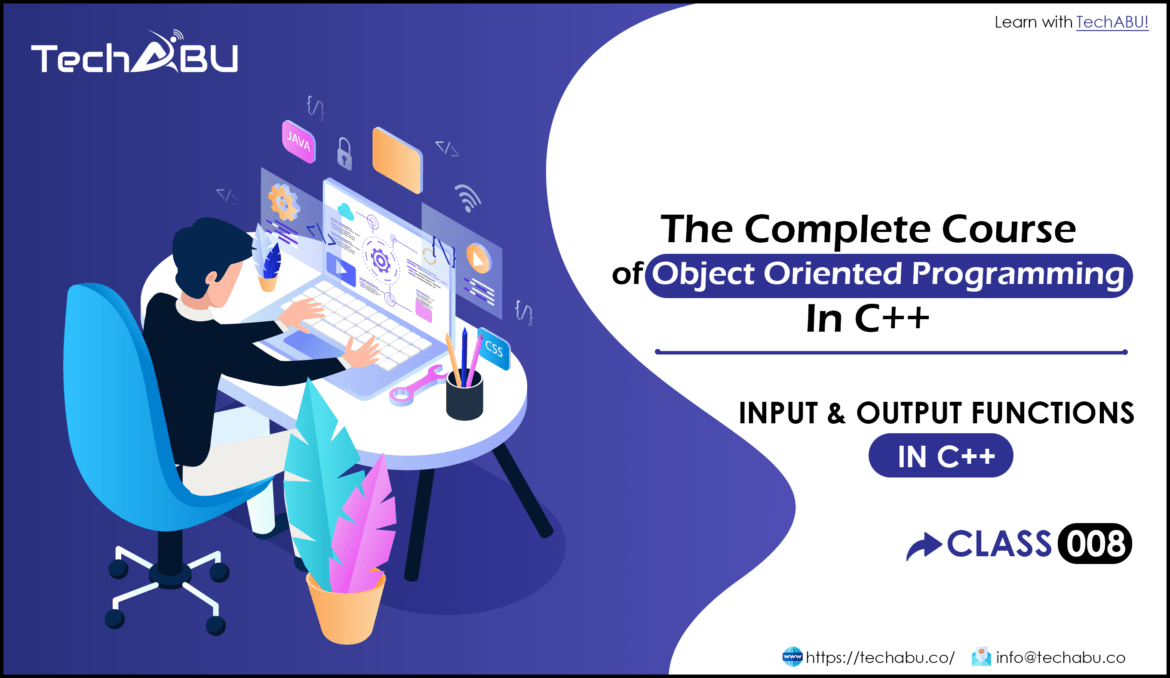 We must take input and display the output to the user to write an effective program. C++ utilizes streams in sequential media like the screen or the keyboard for input and output operations.

A stream is an object where a C++ program inserts characters to or extracts the characters from the stream.

In C++, the following header files are provided for Input/Output operations:

In C++, the keywords cout and cin are frequently used to print outputs and take inputs. In C++, these are the most fundamental techniques for taking inputs and displaying output. To utilize cin and cout in C++, the header file iostream must be included in the program.

In this article, we will cover all the input/output functions that are widely used in C++ programs.

The screen is a C++ program’s default standard output, and cout is the C++ stream object that specifies it. The insertion operator represented as << is used in conjunction with cout. Consider the following code segment:

In the above C++ program, the data is inserted into the stream using the insertion operator <<. It inserts the string Learn C++ Programming and I love Coding into the standard output stream cout.

In a single statement, the insertion operator << can be used several times. Take a look at the following line of code.

The above statement displays the message "Welcome to TechABU's Programming Course." When printing more than one variable or a combination of variables and constants, the insertion operator << must be repeated.

The keyboard is the most common method of inputting data into a computer. To handle standard input, C++ utilizes the stream extraction operator >> and the object cin. The variable that will store the data that will be extracted from the stream must be preceded by the operator >>.

Consider the following C Plus Plus Program.

Once the enter key is pressed, the object cin will process keyboard input. As a result, even if you just request a single character, the extraction from cin will not process the input until after the character has been introduced and the user hits enter.

The standard error stream cerr in C++ is used to output errors. This is a member of the ostream class as well. Because cerr is unbuffered in C++, it is used when the error message does not need to be displayed immediately. It lacks a buffer that would allow it to save the error message and display it later.

The key difference between cerr and cout is that when you use cout, the output is redirected to a file. However, when you use "cerr," the error is not recorded in a file. (This is what the term un-buffered refers to. It is unable to save the message.)

This is an instance of the ostream class that is used to show errors. However, unlike cerr, the error is first entered into a buffer and stored there until the buffer is not filled. If the buffer hasn’t been cleaned directly using flush(). The error notice will also be shown on the screen.

gets () is a standard library function that gets a string from the keyboard and is defined in the studio.h header file. It has the following general syntax:

It takes characters from stdin and stores them as a string in the string variable until it reaches a newline character or the end of the file.

The getch () function is a console function that retrieves the next available keystroke or character. Nothing is repeated on the screen as a consequence of this function. The function waits until a key is pushed if no keystroke is available. When a key is pressed, the function returns the value of the keystroke.

It has the following general syntax: