Quick Pops
Top 10 Countries With The Most Freelancers 2023
Top 10 YouTube Competitors and Alternatives 2023 (Updated)
FCFS Scheduling Algorithm (Preemptive) in OS With C++,...
Z Library: The World’s Largest eBook Library Is...
A STEP-BY-STEP Tutorial on How To Apply For...
Top 10 Largest Smartphone Manufacturing Companies 2023 (Updated)
Functions in C++ (With Examples)
The US Authorities Have Banned Z Library, But...
Crypto Mining Proposed as Negative Industry in China...
13 Best Z Library Alternatives in 2023
Home » Strings in C++ (With Examples)
C++ 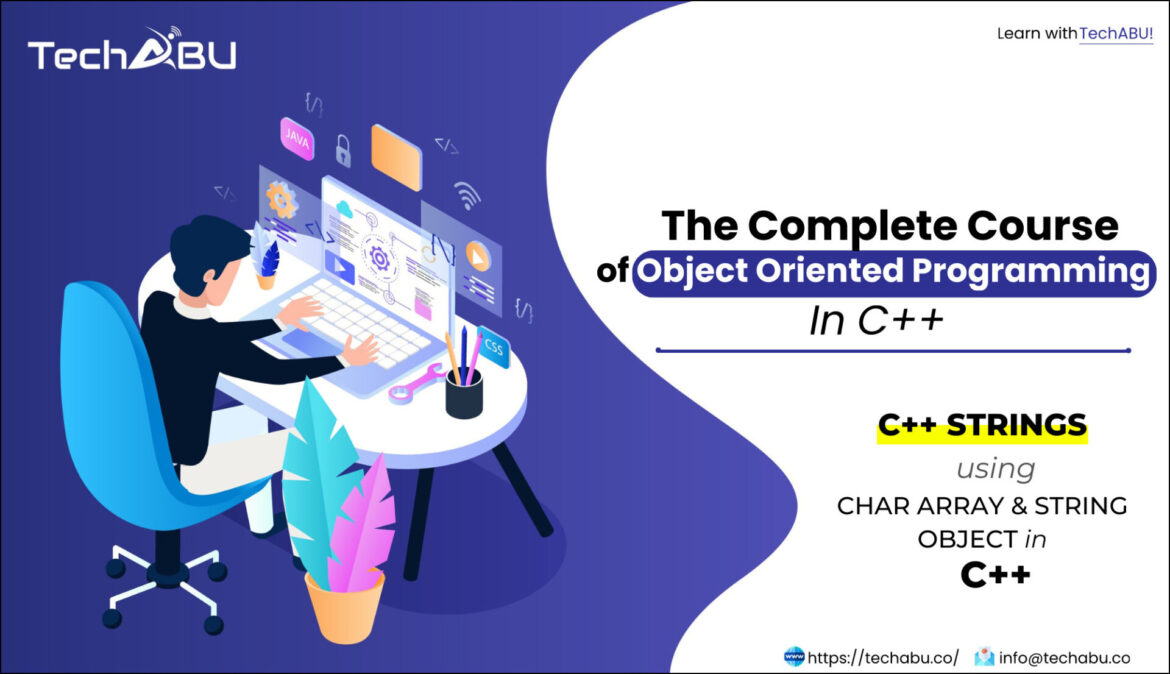 Strings are a sequence of characters surrounded by quotation marks that are used to handle non-numeric data, such as names and addresses.

In C++ programming language, there are two types of strings typically used:

C++ programming supports the use of strings stored in character arrays, which are also known as C-strings.

This type of string is created using an array of characters and is denoted by a char data type. It is a null-terminated string, which is terminated with a null character \0.

The general syntax for defining C Strings is given below:

In the above general syntax, data_type is the char data type, and string_name is the name of the string. The string’s size (the number of characters) is specified in square brackets [ ].

For example, in the following statement, a string called myString is created with a size of 12.

The header file <string> must be included in order to handle strings, while in certain implementations, it may also be automatically included when the header file <iostream> is included.

As an array of characters, strings in C can be initialized the same way arrays are initialized.

Example 1: Displaying a String Entered By The User

1. The above program example starts by declaring two strings, ask_name and greet_now. The first string is the question that will be used to ask the user for their name, and the second string is a greeting message.

2. Then, an array called your_name is declared to store the user’s name.

3. The program then displays the ask_name string, prompting the user to enter their name.

4. The user then types in their name, which is stored in the your_name array.

5. Finally, the program prints out the greet_now string, followed by the user’s name.

In the second output case, as you can see, when the user enters his full name, Abu Zar, then only the Abu is printed, and the other part that is Zar, is not displayed on the screen. But why?

This is the modified code :

In the modified C++ program, we have included the string header file <string>.

We have declared a string variable instead of a character array to store the user’s name.

We have used the getline() function instead of cin to read the user’s input.

The getline() function reads the characters until it finds a new line character \n.

Hence, the greeting message is printed with the complete user’s name.

Strings in C have several limitations. The class <string> in C++ solves several of these problems and helps overcome them.

This class offers common string operations, including comparison, concatenation, find and replace, and a method for obtaining substrings.

Unlike char arrays with a fixed length, string objects can be extended as needed.

The general syntax for defining a string in C++ is given below:

Example 2: C++ Program To Get a String From The User

This program takes an input string from the user and displays it on the screen.

Passing String To a Function

Example 3: C++ For Passing a String to a Function

The program begins by declaring a function called myFunction that takes a string as an argument.

In the main function, a string variable called name is declared, and it asks the user to enter their name.

The user’s input is stored in the name variable and is then passed to the myFunction function as an argument.

The myFunction function then prints out a string with the user’s name.

What is Virtual Reality? Types, Uses, Benefits, and Examples