Quick Pops
Top 10 Countries With The Most Freelancers 2023
Top 10 YouTube Competitors and Alternatives 2023 (Updated)
Z Library: The World’s Largest eBook Library Is...
A STEP-BY-STEP Tutorial on How To Apply For...
FCFS Scheduling Algorithm (Preemptive) in OS With C++,...
The US Authorities Have Banned Z Library, But...
Top 10 Largest Smartphone Manufacturing Companies 2023 (Updated)
13 Best Z Library Alternatives in 2023
Crypto Mining Proposed as Negative Industry in China...
Statements, Statement Terminator, and Comments In C++
Home » The Difference Between x32-Bit and x64-Bit Processor
ICT

The Difference Between x32-Bit and x64-Bit Processor4 min read 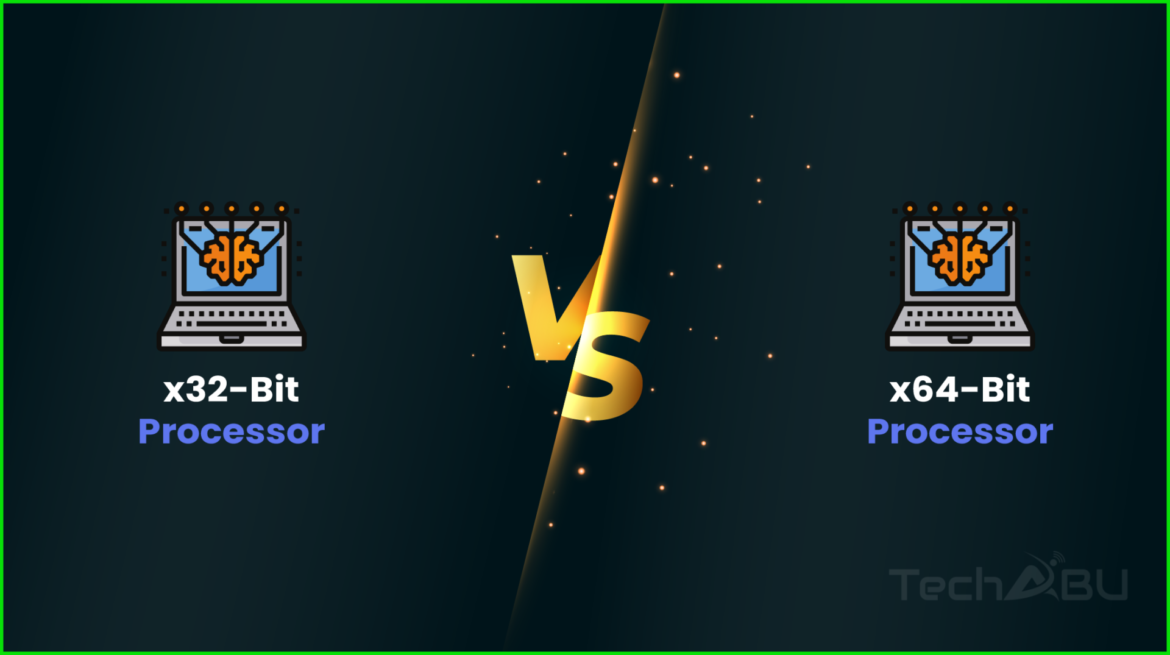 When you download an app or install a game, you’ll likely see 32-bit and 64-bit alternatives. It’s possible that your computer has a sticker that says it has a 64-bit CPU. But what exactly do these terms mean, and how do 32-bit and 64-bit differ?

In this article, we will try to resolve all your confusion related to these widely used terms.

When it comes to computers, the difference between 32-bit and 64-bit refers to the amount of processing power. 32-bit processor computers are older, slower, and less secure, whereas 64-bit processors are newer, quicker, and more secure.

The central processing unit (CPU) of your computer is similar to the brain of the computer. It is in charge of all communication and data flow to and from the rest of your computer. Two or more processors are used in some computers.

However, only two types of CPUs are available today: 32-bit and 64-bit processors. Your computer’s CPU has an impact on its overall performance as well as the applications it can run.

These are terms that are similar to 32-bit vs. 64-bit, but they are a little misleading.

Because they’re all 32-bit, the terms x86 and 32-bit have become interchangeable.

Similarly, x64 has become interchangeable with 64-bit (and is even used by Microsoft), despite the fact that there aren’t many processors with a number ending in 64. Instead, it’s just a shortened form of 64-bit.

While a 64-bit processor has more processing power than a 32-bit processor, a 64-bit computer or software is not always required. Your existing setup will determine whether you should install a 32-bit or 64-bit program on your PC.

If you want your computer to run speedily, a 64-bit CPU is the way to go. Because most apps are backward compatible, you can even utilize this CPU to run 32-bit programs. As a result, most 32-bit programs will run on 64-bit computers. A 32-bit computer, on the other hand, will not execute 64-bit software.

The Advantages of a 64-Bit Processor?

Here are a few reasons why you should consider switching to a 64-bit processor:

The 64-bit CPU not only handles more data but also improves graphics performance. This means that running programs, editing images, and playing graphic-intensive games will all be smoother on your PC.

The 64-bit version of Windows also needs mandatory driver signing, which is Microsoft’s methodology for preventing unsigned malicious drivers from executing on the system. The term “driver sign” refers to a digital stamp that verifies that a file has been tested with the operating system and comes from a trustworthy source. Malware producers would have a hard time getting around the Windows 64-bit system’s mandatory signing process.

A compatibility layer in a 64-bit operating system limits the functionality of 32-bit programs. Without getting into too much technical detail, this means that previous malware will not be able to execute on your 64-bit Windows version.

A 64-bit computer is helpful for more than just extra memory. Data can be moved about in 64-bit chunks on 64-bit processors, which is obviously more efficient than 32-bit chunks.

You’ll probably see a Program Files (x86) folder on your hard drive if your PC runs 64-bit Windows. This folder includes 32-bit software, whereas the other ‘Program Files’ folder has 64-bit applications.

Because 64-bit computers are backward compatible, they can execute 32-bit programs. However, it does not operate in reverse: a 32-bit computer cannot run 64-bit Windows or 64-bit applications.

Developers should be developing 64-bit software these days, and some companies require it. Apple, for example, has stated that iOS 11 will not allow 32-bit apps at all. Thus developers must verify that their apps are compatible with 64-bit CPUs; otherwise, users would be unable to use them after upgrading from iOS 10.

Now that you understand the differences between 32-bit and 64-bit CPUs, you should figure out which one your computer has. So, how do you know? The answer to this query is dependent on the operating system you’re using.

How to Check if Your Windows 11 Computer/Laptop Is 64-Bit:

If you’re on the market for a laptop or desktop computer, chances are you’ll find one with a 64-bit CPU. All you need to do is utilize software created specifically for these systems.