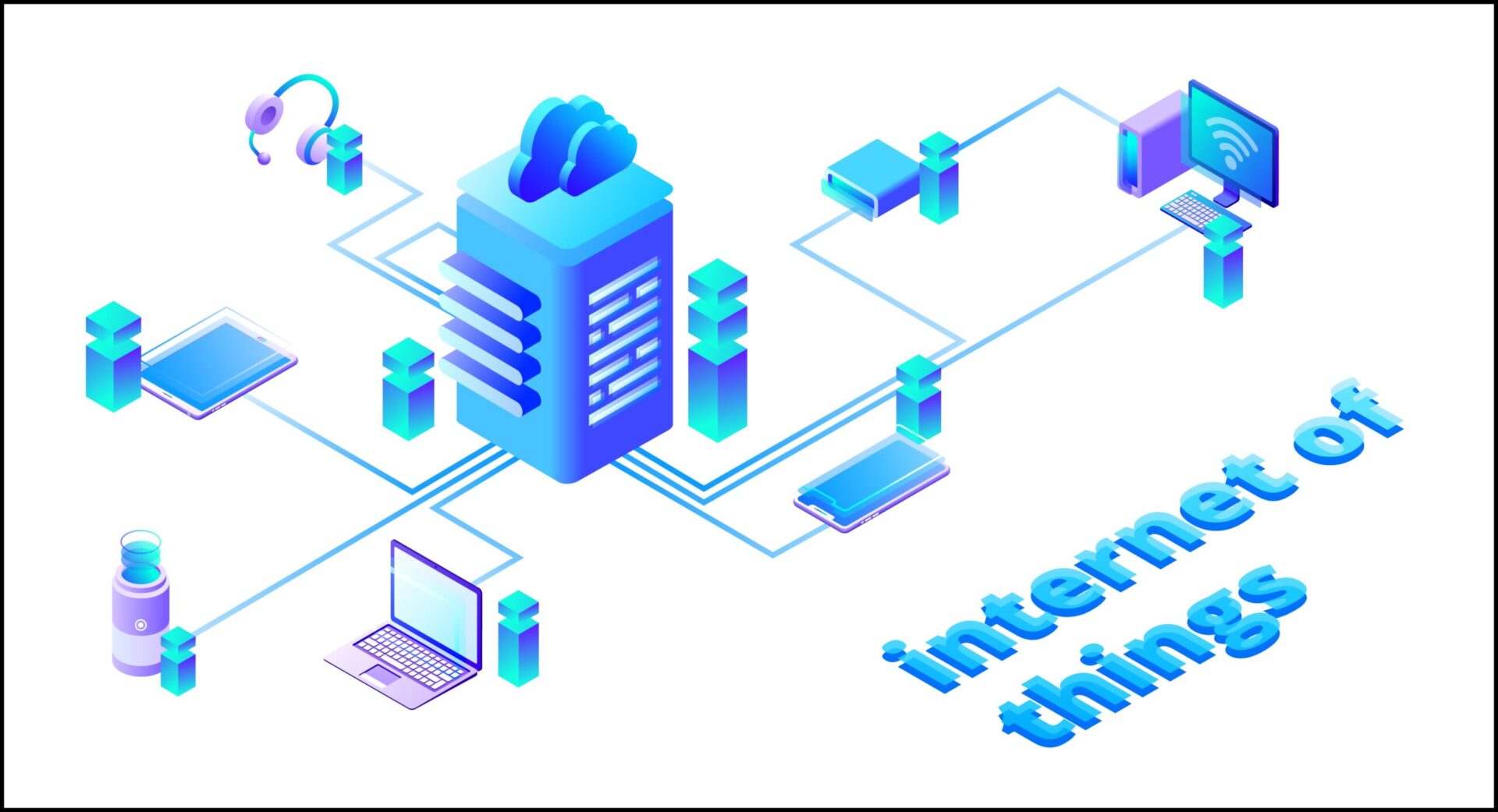 The Internet of Things (IoT) is a network of physical objects (or “things”) that are connected to exchange data with other devices and systems through the internet using sensors, software, and other technologies.

These devices range in complexity from everyday household items to sophisticated industrial instruments. Experts predict that by 2021, there will be more than 10 billion connected IoT devices, and by 2025, there will be 22 billion.

How Does The Internet of Things (IoT) Work?

An IoT ecosystem is made up of web-enabled smart devices that gather, send, and process data from their surroundings using embedded systems such as CPUs, sensors, and communication hardware. IoT devices can exchange sensor data sent to the cloud for analysis or inspection locally by connecting to an IoT gateway or other edge device. These devices may communicate with one another from time to time and rely on the data they receive. Individuals can interact with the devices to set them up, give them directions, or retrieve data, but they do most work alone.

The installed IoT apps define the connection, networking, and communication protocols that these web-enabled devices employ.

What Is The Internet of Things’ (IoT) Importance?

IoT has emerged as one of the most critical technologies of the twenty-first century in recent years. Now that we can use embedded systems to link ordinary objects to the internet, including kitchen appliances, automobiles, thermostats, and baby monitors, seamless communication between people, processes, and things is possible.

Physical objects can share and acquire data without the need for human intervention thanks to low-cost computers, the cloud, big data, analytics, and mobile technologies. Digital systems can record, monitor, and adapt every interaction between linked items in today’s hyper-connected environment. When the physical and digital worlds collide, they work together.

What Technologies Have Enabled The Internet of Things (IoT)?

While the Internet of Things concept has been around for a long time, recent breakthroughs in various technologies have made it a reality.

Businesses can obtain insights faster and more readily thanks to improvements in machine learning and analytics and critical access to diverse and vast volumes of data stored on the cloud. IoT data feeds these technologies, and the rise of these related technologies continues to push the boundaries of IoT.

Cloud platforms are becoming more widely available, allowing organizations and individuals to access the infrastructure they need to grow without handling it themselves.

Thanks to improvements in neural networks, Natural Language Processing (NLP) has been introduced to IoT devices (such as digital personal assistants Alexa, Cortana, and Siri), making them more appealing, affordable, and practical for home use.

Companies are capitalizing on the enormous commercial value that IoT may bring as it gets more widely used in the marketplace. These advantages include:

Applications of Internet of Things (IoT)

Because it is adaptable to nearly any technology capable of delivering meaningful information about its operation, the performance of an activity, and even the environmental conditions that we need to monitor and regulate at a distance, IoT technologies have a wide range of applications.

Many industries are now using this technology to simplify, streamline, automate, and control multiple critical processes. Following that, we highlight some of the IoT’s surprising practical applications.

Wearable technology such as virtual glasses, fitness bands that measure calorie burn and heart rate, and GPS tracking belts are just a few examples of what we’ve been using for a while. The Internet of Things and its applications have been developed and integrated into our daily lives by companies such as Google, Apple, Samsung, and others.

These are tiny, energy-efficient devices featuring sensors, the appropriate hardware for measurements and readings, and software for collecting and organizing data and information about users.

The Internet of Things can help control automobile traffic in major cities, contributing to smart cities.

We use the Internet of Things to inform us and contribute to traffic monitoring, showing the conditions of different routes, and feeding and improving the information on different paths to the same destination, distance, and estimate when we use our mobile phones as sensors, collecting and sharing data from our vehicles through applications such as Waze or Google Maps.

Doctors can monitor a patient’s status outside of the hospital and in real-time multiple and by using wearables or sensors attached to them. The Internet of Things enhances patient care and prevents deadly events in high-risk patients by continuously monitoring specific metrics and giving automated warnings on their vital signs.

Another application is IoT technology into hospital beds, resulting in smart beds with sensors that monitor vital signs, blood pressure, oximeter, and body temperature, among other things.

Sensors in fleet cars aid in the creation of effective interconnectivity between vehicles and their managers and between cars and their drivers. The driver and the manager/owner may learn a lot about the vehicle’s status, functioning, and requirements by accessing the software that gathers, analyses, and organizes data. Without needing to wait for the driver to notice, receive real-time maintenance incident warnings.

The application of the Internet of Things to fleet management aids in geolocation (and, with it, route monitoring and identification of the most efficient routes), performance analysis, telemetry control and fuel savings, pollution reduction, and can even provide valuable information to improve vehicle driving.

Smart farms are a reality. The Internet of Things gives farmers access to specific knowledge and valuable information on their soil conditions, critical for producing decent harvests.

A substantial amount of data on the state and phases of the soil may be gathered through IoT sensors. Soil moisture, acidity, the presence of particular nutrients, temperature, and other chemical properties aid farmers in controlling irrigation, maximizing water efficiency, determining the ideal times to sow, and detecting the presence of diseases in plants and soil is also possible.

Below are some of the advantages and disadvantages of the Internet of Things (IoT).

There are more linked devices in our world than there are individuals. The Internet of Things (IoT) will revolutionize how corporations, governments, and individuals interact with the rest of the linked world.

However, IoT issues certainly exist, just as they do with any new technology. Acceptance, cost, connectivity, security, and other problems are all concerns. Standards are still being established as a result of the influx of new players. Despite these obstacles, the IoT’s long-term ambitions hold a lot of potentials.

IoT innovations will continue to evolve as more technology and connectivity techniques enter the market, transforming disconnected objects into smart connected devices. This tendency will impact a wide range of industries, as well as our personal life.

What is Digital Marketing?